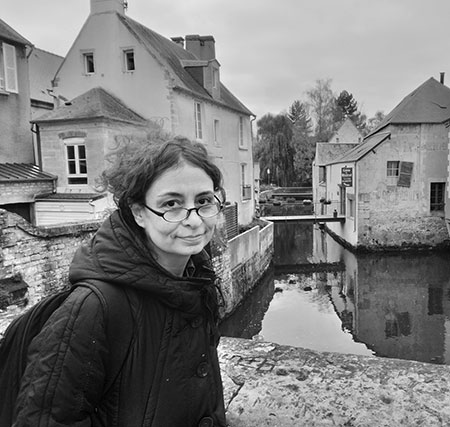 Born in 1972, Annie Kurkdjian had to endure sixteen years of civil war in her native Beirut. Her childhood was marked by the noise of bombs, terror, permanent insecurity and the inconsistency of ordinary things. As an Armenian, she already held out the traumatism of the Armenian genocide through the history of her grandmother. At the age of twelve, when her family was preparing to flee Lebanon for France, she lost her father in a ferocious murder during a hold-up. The next day she discovered pictures of his lifeless body, riddled with bullets, in the newspaper. As a young adolescent she suffered from PTSD (Post Traumatic Stress Disorder) and realized that she had to find an outlet to the distress imprinted in her body. After a period of trying to find her niche, leading through studies of management, art, followed by psychology and ultimately theology, Annie decided to turn the page in 2005 and she started a new life as an artist, with regular expositions in France, Lebanon, Bahrein, Jordan and several other countries.

Her paintings are sober and at the same time powerful, they portray beings in tortured postures, monstrous, grotesque. Sometimes they fixate on the beholder, with a numb eye and vaulted shoulders, as if harassed or lost. Their bodies seem dissected, analyzed, they form shivery and poignant images. These big canvases breathing tragedy interrogate us about life itself. According to Annie Kurkdjian the answers lurk in the sincerity of the artistic approach: “Art is capable of sublimating everything, war, crime, shame, sickness and total hell”.